Minimera On this page

What are dioxins and PCBs?

Dioxins and PCBs are organic environmental pollutants that are widespread in the environment. Dioxins are formed during the industrial production of chemicals containing chlorine, as well as in combustion processes, such as waste incineration. PCBs are industrial chemicals that were used in many areas, for example, in transformers and sealants in houses, before they were banned in Sweden in the 1970s.

How are we exposed to dioxins and PCBs?

We are exposed to dioxins and PCBs via our food. The substances are fat-soluble, very persistent and are found in fatty foods such as fish, meat and dairy products. Particularly high levels are found in fatty fish such as herring and wild-caught salmon from polluted areas such as the Baltic Sea, the Gulf of Bothnia, Lake Vänern and Lake Vättern.

How can dioxins and PCBs affect health?

Dioxins are some of the most toxic substances known, but the risk depends not only on the toxicity but also on the level of exposure. Dioxins and PCBs bioaccumulate in the body for a long period of time. Foetuses and infants are extra sensitive to dioxins and PCBs as they develop. For children, adolescents and women of childbearing age, it is particularly important to be exposed to as little dioxins and PCBs as possible, since dioxins and PCBs are stored in the body and are transferred to the foetus and nursing infants via the placenta and breast milk.

High levels of dioxins and PCBs during the foetal and neonatal period can affect, for example, sperm quality at adulthood, as well as levels of thyroid hormones and tooth enamel. It is suspected that these substances also affect brain development, the immune system and cause cancer. In very high doses, dioxins can also cause chloracne, a long-lasting skin inflammation in the face.

Children, adolescents and women of childbearing age, including pregnant and breastfeeding women, are advised not to eat fish that may contain high levels of dioxins and PCBs more than two to three times a year. Other consumers should not eat this kind of fish more than once a week.

The salmon sold in Swedish supermarkets is usually aquacultured or caught in the Atlantic or Pacific Ocean and has lower levels of dioxins and PCBs. This also applies to fish aquacultured in the Baltic Sea, the Gulf of Bothnia, Lake Vänern or Lake Vättern. Most herring sold in glass jars in supermarkets is not from the Baltic Sea. Read the packaging or ask a member of staff to find out where the fish is from.

More facts about dioxins and PCBs

Figure 2. The structural formula for PCB 169

The total concentration of dioxins and dioxin-like PCBs is usually described as dioxin (TCDD) equivalents (TEQ). The TEQ system is a way of merging the levels of the different congeners, given that they have different levels of toxicities.

Dioxins are not deliberately produced but are formed in small quantities as impurities in, for example, the production of certain chlorine compounds. The use of pentachlorophenol is considered to be a major source of dioxins in industrialized countries. Dioxins are also formed in combustion processes such as waste incineration. In the past, wastewater from chlorine bleaching processes was also an important source of dioxins. In Sweden, dioxin emissions have been regulated since the 1970s.

PCBs are industrial chemicals that have had many different applications due to their heat-resistant and insulating ability. PCBs have been used in capacitors, transformers, heat exchangers, sealants in houses and in colours. The use of PCBs in Sweden has been prohibited since the 1970s.

Within the EU, the so-called tolerable weekly intake (TWI) for dioxins and dioxin-like PCBs has been established to two picograms TEQ/kg body weight per week by EFSA, the European Food Safety Authority. This corresponds to the amount of dioxin-like substances that a person can be exposed to every week throughout their life without the risk of health effects. It has not been possible to establish a health-based TWI for non-dioxin-like PCB congeners, but research is ongoing.

Maximum Limits and the Swedish derogation

Since 2002, Sweden has had a derogation from the EU MLs for dioxins and PCBs in certain fish species. The fish species that are exempt from the MLs are wild-caught herring larger than 17 cm, salmon, char, trout and river lamprey caught in the Baltic Sea area, including Lake Vänern and Lake Vättern. The derogation of the MLs means that these species may be sold in the Swedish market, regardless of their levels of dioxins and PCBs.

Links to legislation on fish from the Baltic Sea area as well as dioxins and PCBs in food can be found at the bottom of the page.

How much dioxins and PCBs are we exposed to?

The Swedish Food Agency’s calculations show that the median intake of dioxins and dioxin-like PCBs is 3.5 pg TEQ/kg body weight and week in adults (18–80 years) in Sweden (see the report “Risk and Benefit Assessment of Herring and Salmonid Fish from the Baltic Sea Area” via the link at the bottom of the page). About one half of the dioxins and PCBs we are exposed to comes from fish. Dairy products and meat are also important exposure sources.

Fat solubility and the fact that the substances are very persistent means that dioxins and PCBs are stored in body fat for a long time. During pregnancy and breastfeeding, some of these substances are transferred from the mother to the child via the placenta and breast milk. The levels of dioxins and PCBs measured in Swedish breast milk show that the exposure of breastfed infants is significantly higher than the TWI. Nevertheless, both national and international expert groups agree that breastfeeding should be encouraged as the positive effects of breastfeeding outweigh the risks of dioxins and PCBs. It is important to remember that the TWI is the recommended maximum average intake per week throughout a lifespan. Also, children who have passed the breastfeeding stage have a relatively higher intake of dioxins and PCBs from food than adults. This is largely because children eat more than adults in relation to their body weight. Another group with high exposure to dioxins and PCBs is people who consume a lot of fatty fish from contaminated areas, such as recreational and professional fishermen and their families.

If the TWI is exceeded for shorter periods during life, this probably means no increased health risk. 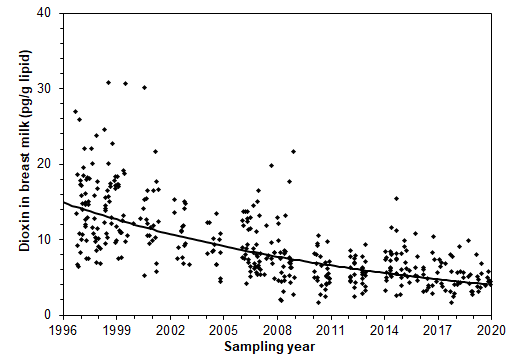 Figure 5. Levels of dioxins (total-TEQ) in breast milk from first-time mothers in Uppsala, sampled 1996-2019. The levels have decreased about 6% per year. 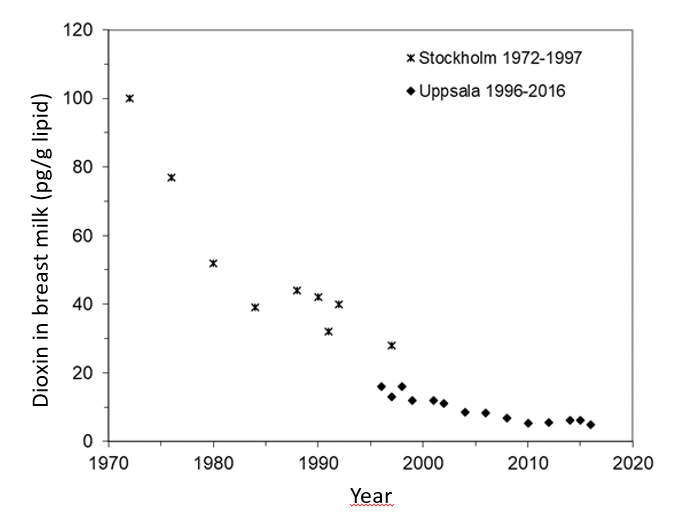 Figure 6. Levels of dioxins (total-TEQ) i breast milk from Sweden from the 1970s to 2016. Levels from Uppsala comes from the Swedish Food Agency's surveys. Levels from Stockholm are from Norén och Meironyté, 2000. (Certain organochlorine and organobromine contaminants in Swedish human milk in perspective of past 20-30 years. Chemosphere 40:1111-1123).